Shortly after we moved in, we were told the board passed new rules that would place large additional obligations and liabilities on us related to the roof terrace area outside out unit. We understand, from our attorneys and real estate brokers who have looked into the details, that these new obligations make our apartment generally unsellable. We were unable to reach any agreement with the Co-op about the dispute and were forced to litigation. We have never sued anyone before in our lives.

As evident from the documents below, an enormous amount of legal resources has been spent on a rather simple issue of contract law. The Co-op board appears to be trying to stonewall us into caving under the pressure of legal fees as opposed to seeking an equitable resolution to a problem. It has used every legal maneuver to deny us a hearing on the merits of the issues. They even argued we don’t have standing to litigate because improperly disputing we don’t have an interest in the terrace surrounding our apartment!

Fundamental concern impacting all shareholders: The Co-op has argued that any rules imposed by the Board change the proprietary lease. They argue, under an obscure statute normally applied to certain government bodies (Article 78), that unless the shareholder files suit within 120 days, they have right no legal recourse! Should this be upheld, the implications for Co-op shareholders would be staggering. It would make the proprietary lease largely useless. It’s hard to imagine how a bank could even lend using the proprietary lease as collateral as they would not have enough time or notice to protect it!

Given the magnitude of our investment, we have little choice but to continue to litigate to save it. The Co-op board’s motivation is less clear. Prior to litigation, the Co-op board even turned-down a proposal by the own long-time attorney, Mr. Herb Cohen. Mr. Cohen’s proposal would have settled the dispute at minimal expense – a proposal we accepted! The Co-op board also terminated court-ordered mediation, even though the mediator seemed to be making significant progress.

Even more troubling is that the Co-op’s legal documents and court statements seem to deny we have exclusive use of the terrace that wraps around the apartment, despite a prior board decision that settled the matter! We never expected to have to expend years of litigation to defend our investment from the actions of the Co-op board. 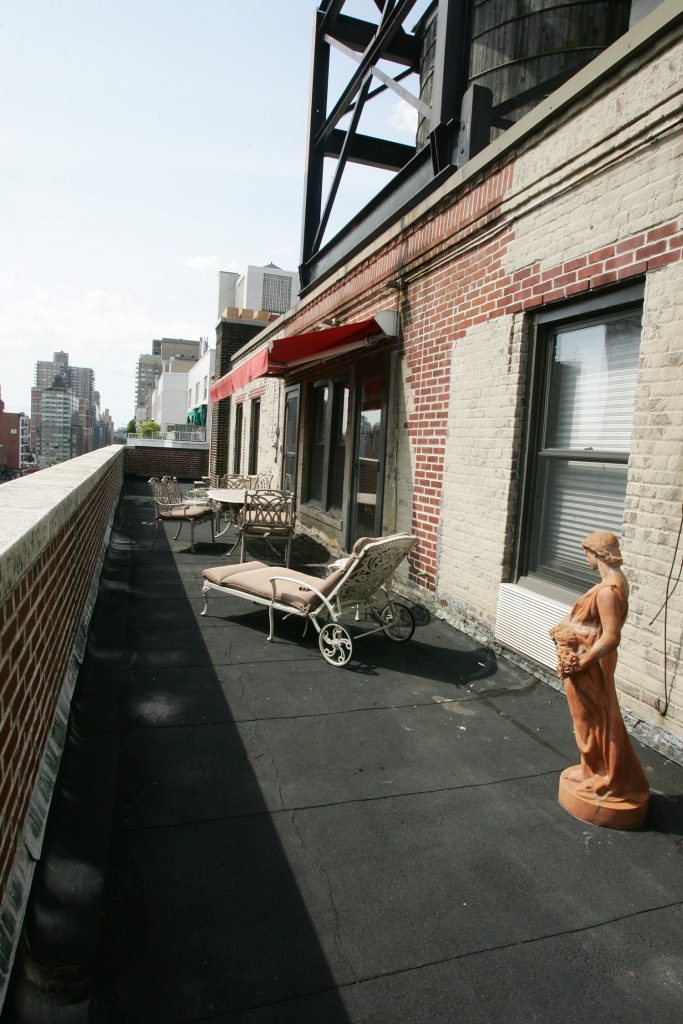 The above photograph from the New York Post contrasts considerably with sworn affidavits from Douglas Elliman property manager’s Karel DeBoer (paragraphs 1-8) and Kaswaree Narine (paragraph 15) that the prior resident did not use the terrace or place anything on it.

“Since Approximately May 25, 2008, I have been property manager for 425 East 86th Apartments Corp (the “Co-Op”)…..The roof space outside the apartment was – since the time I became manager of the Co-op – a “service” rather than an “entertainment” roof…it was not improved so as to invite or enable comfortable use thereof for dining, entertaining, relaxing, etc….To my knowledge, while she did have doors leading out of the Apartment to the roof area, Ms. Kaufman did not use the roof space for entertaining or any purpose other than opening the doors to let some fresh air into the Apartment.” (Sworn Affidavit of Karl De Boeur, October 29, 2014).

“This new membrane is comparable that had been in place thereto, over which no decking or other material had been placed by the prior occupant/owner of PH-A (Elaine Kaufman), the Co-Op or anyone else” (Sworn Affidavit of Kaswaree Narine,  October 29, 2014)

We believe all information on this website is both accurate and in the public domain/non-privileged. If there is reason to believe otherwise, contact us at: admin@425east86th.com and we will work to promptly evaluate the concern(s) and make any appropriate change(s).